President Erdogan’s government has seen the Turkish lira’s record low of 18 against the dollar near the end of 2021. Turkey’s currency is debased and is declining in strength by the day. Its Central Bank lacks independence, and Erdogan’s policies have degraded the rule of law such that corruption and support for extremism go unchecked. Meanwhile, the Turkish people’s daily cost of living is becoming unbearable under rising inflation, which reached nearly 80% in June of 2022.

Yet many international companies remain unaware of the risks of doing business in and with Turkey’s corrupt and autocratic regime, inadvertently putting their own interests at risk while contributing to a corrupt and kleptocratic system. TDP’s team has compiled an index of risks associated with doing business in Turkey with the AKP and with AKP-supported companies.

Companies doing business with Turkey risk entanglement with multiple corrupt Turkish banks and financial institutions that engage in illicit international finance, such as sanctions evasion schemes with Iran and Venezuela. Turkey has a weak legal framework in place to properly investigate, freeze the assets of, or convict money launderers and financial criminals. Investigations into money laundering and sanctions violations are routinely blocked, while individual investigators are dismissed and even imprisoned. The latest major banks to be involved in sanctions evasion and money laundering schemes are Halkbank, Aktif Bank, and Ziraat Bank. The illicit actions of Halkbank, Ziraat, and other major Turkish banks are not isolated incidents but the inevitable systemic corollary of a financial system that fails to prosecute and regulate corruption, leaving many of Turkey’s financial institutions vulnerable to criminal activity. Doing business with any Turkish Bank puts companies at risk of exposure to the same.

Under Erdogan’s presidency, Turkey has undergone a steady erosion of its democratic system into an authoritarian structure, where almost no branch of government or sector of the economy is fully independent of the executive branch. Erdogan’s closest associates control large portions of the construction, energy, communications, financial services, and media sectors. This system of kleptocracy ensures that the best business opportunities go to the most loyal members of the AKP, or those with familial connections, and that any illegal activity or tax evasion goes unreported and unpunished. Any contracts carried out in Turkey require a disproportionate, prohibitively costly, if not practically impossible, amount of due diligence to ensure that return-on-investment analyses are correct. Following Turkey’s placement on the Financial Action Task Force’s Grey List, any company doing business in Turkey must ensure their partners have not participated in any form of illegal activity such as sanctions evasion, money laundering, or financing of terrorism.

Turkey’s central bank is not independent of its government, and this entanglement is fundamentally damaging to the Turkish economy. Erdogan lowers interest rates in contradiction to prevailing economic orthodoxy, fires central bank governors who do not toe the party’s economic line, and prosecutes economic experts who criticize the government’s policies or report accurately on inflation statistics.

This combination of politically-motivated moves at the Central Bank, as well as Turkey’s growing deficit, its lack of foreign currency reserves, and its banks’ growing foreign debts, has contributed to its recent downgrading by Moody’s to a B2 score with a negative outlook. Potential investors can expect little to no stability or predictability with regard to Turkey’s monetary policy.

Any company that does business, or seeks to do business, in or with Turkey—a country that has become notorious for grave human rights abuses, support for extremism, and foreign aggression—risks serious long-term reputational damage. Companies that have already had to publicly sever ties with the Turkish military-industrial sector due to reputational risk include Garmin, Viasat, and Beringer Aero, among others.

President Erdogan’s erratic and unreliable behavior as an ally puts business in Turkey continually at risk of coming under new sanctions. The United States has already imposed sanctions against Turkey’s Presidency of Defense Industries (SSB) and on Ismail Demir, president of SSB, in response to Turkey’s purchase of the S-400 system from Russia. Erdogan’s growing ties with both Russia and Iran—two countries facing extensive international sanctions—put Turkish industries at risk of secondary sanctions. As the Turkish President engages in an increasingly dangerous and inconsistent foreign policy, the risk of violating sanctions by doing business in Turkey grows by the day. Not only does this present a legal risk to international companies, sanctions violation incurs reputational risk and severely damages goodwill. 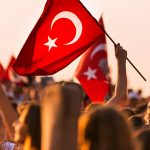